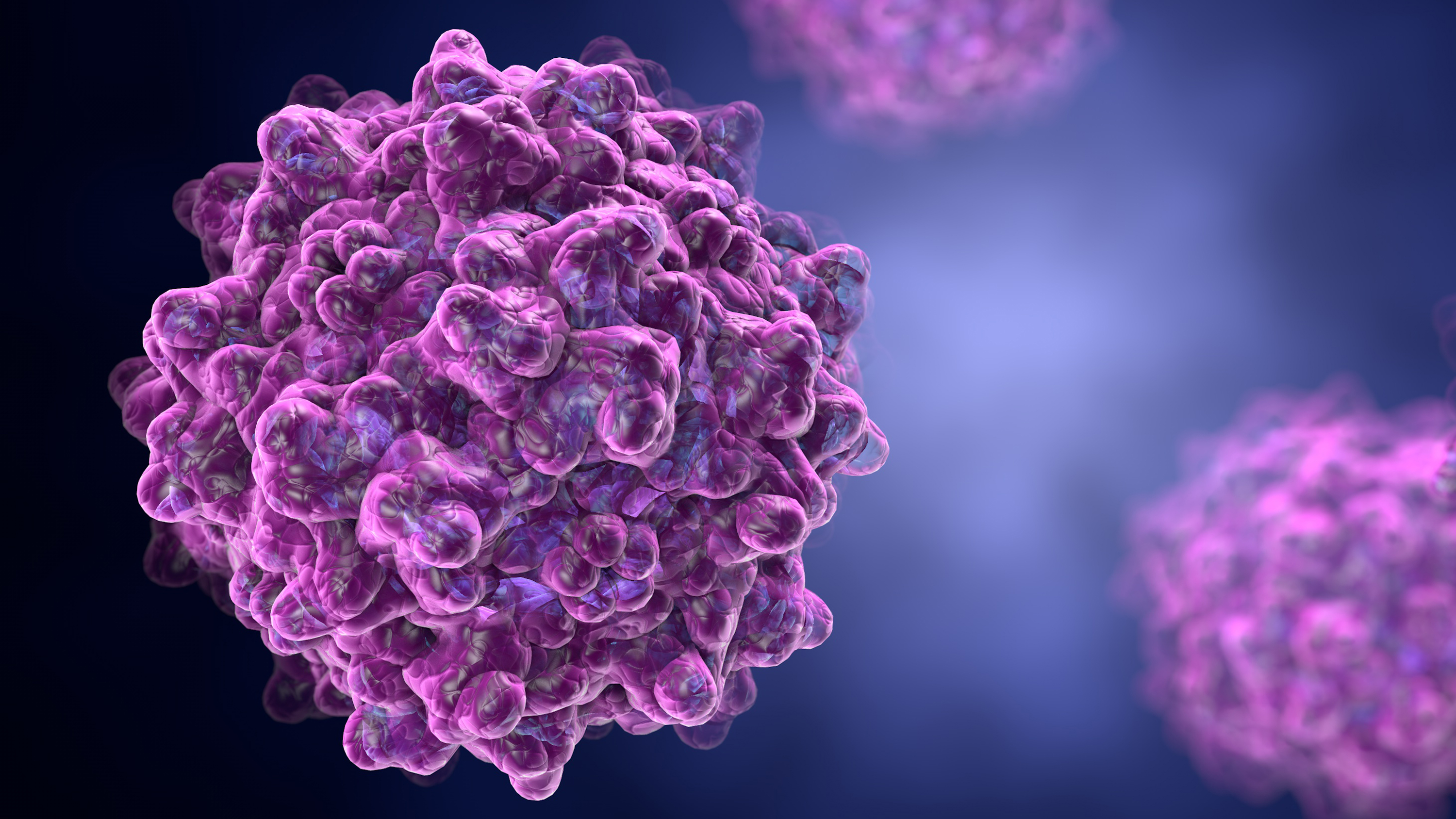 The adeno-associated virus (AAV) is a powerful vehicle for gene therapy; however, working with AAV vectors can be challenging. Each construct contains two inverted terminal repeat (ITR) sequences, usually 145 bp in length, that flank the gene of interest (see figure below). The ITRs form highly stable T-shaped hairpins, which are critical for the replication and encapsidation of viral DNA. These structural features can also wreak havoc on traditional cloning workflows. Spontaneous deletions in the ITR region plague DNA preparations of the transfer plasmid, and the formation of secondary structure stymies confirmatory sequencing. Hence, investigators are hit with a double whammy: not only are AAV vectors prone to ITR truncations, but also such mutations are tricky to detect. Here, we’ll discuss the challenges of propagating and validating AAV plasmids and propose an optimized approach to the workflow. 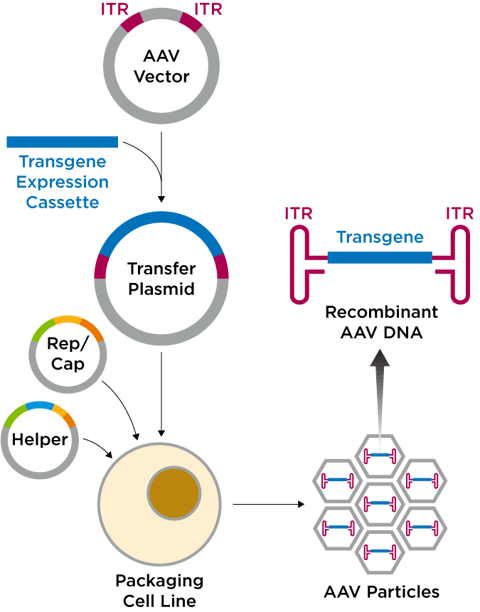 Production of recombinant AAV particles. A gene of interest is cloned into an AAV vector to create a transfer plasmid, which is then introduced into a eukaryotic cell line. Generating functional viral particles requires co-transfection with several viral genes, supplied by packaging plasmids (i.e. Rep/Cap and helper plasmids). Recombinant single-stranded DNA, containing the transgene flanked by inverted terminal repeat (ITR) sequences, is packaged into capsids. The ITRs form very stable hairpins, which are problematic for amplification and sequencing of AAV plasmids during the early steps of the workflow.

The ITR regions in AAV plasmids are notoriously unstable. Their palindromic nature and high GC content make them prone to full or partial deletions during propagation in bacteria1. As a result, a significant portion of clones after transformation may contain mutated ITRs, and plasmid DNA preparations from a liquid culture may contain a mixed population (see figure below). The underlying mechanism of this phenomenon in bacteria is not well understood; secondary structure and strand slippage in the replication fork may play a role2. Since the loss of ITR sequences confers a growth advantage to the host bacteria, a mutation can rapidly amplify in a growing culture1. Even with the best standard practices, AAV plasmid preparations can contain a significant fraction (5-15%) of plasmid DNA with mutated ITR sequences3. Disruption of ITRs can lead to reduced efficiency in viral packaging and increased variability in downstream experiments4. 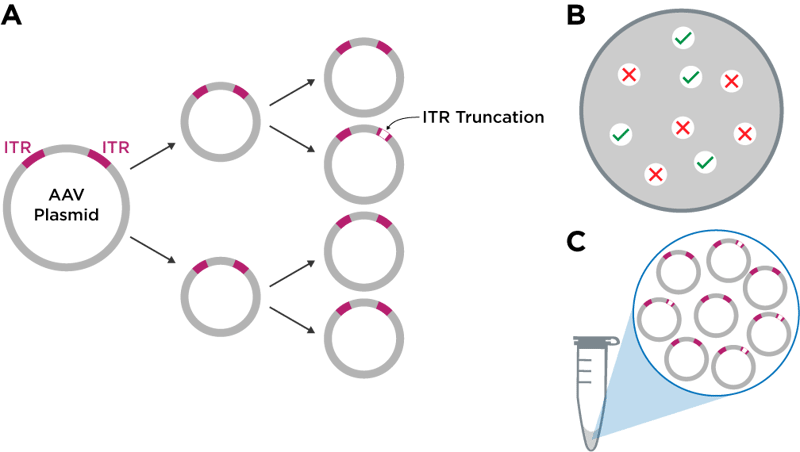 Plasmids with ITR sequences exhibit high instability. (A) Mutations and truncations frequently arise in the ITRs during propagation in bacterial cells. (B) When selecting colonies from an agar plate, many clones may contain the mutation. (C) When growing bacteria in liquid culture, the resulting plasmid preparation may contain a mixture of DNA molecules.

Given the frequency of truncations that arise in AAV plasmids, it’s critical to monitor the integrity of ITRs throughout cloning, especially prior to viral packaging. Sanger sequencing is the gold standard for plasmid sequence confirmation; however, standard protocols fail to read through ITR regions. The strong secondary structure of ITRs inhibits DNA polymerization, leading to a significant drop in signal intensity in chromatograms (see figure below). Common strategies for sequencing difficult templates, such as adding DMSO and/or betaine, are ineffective for ITRs5,6.

Sequencing chromatogram showing early termination of signal at the start of the ITR sequence. Standard protocols for Sanger sequencing fail to read through ITR regions.

Restriction digestions are traditionally performed to screen for ITR deletions. The enzymes SmaI and SrfI are often used, as they cut within the C-C’ arm of the ITR3. Given the limited resolution of gel electrophoresis, diagnostic digests fail to detect small deletions and point mutations outside the restriction site (see example below). In short, restriction enzyme analysis alone is insufficient to monitor ITR integrity in plasmids. 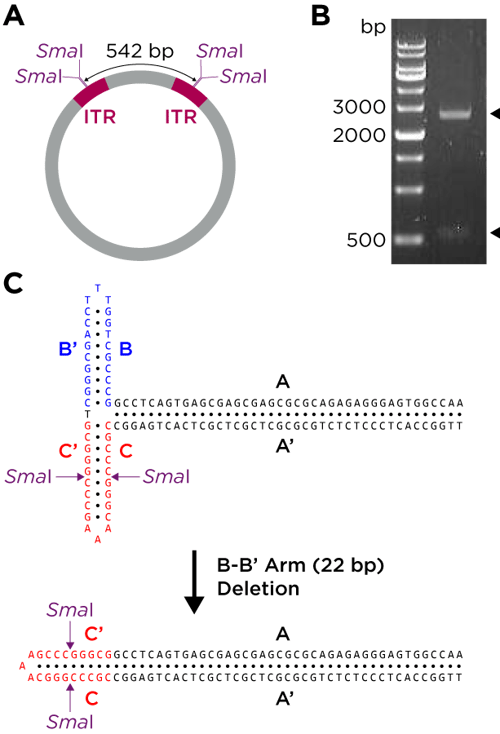 Restriction enzyme analysis fails to detect small deletions in ITRs. (A) Restriction map of an AAV plasmid in which SmaI cuts twice within the ITR region. (B) Gel of SmaI digestion showing bands of expected size. (C) The analyzed plasmid preparation actually has a deletion of the B-B' arm in one of the ITR regions, discovered through Azenta's AAV-ITR sequencing (see below). Agarose gel electrophoresis does not have sufficient resolution to identify a loss of 22 bp.

How to Optimize AAV Plasmid Preparation

The following proactive measures can minimize the risk of mutations in ITRs and provide effective quality control of AAV plasmids preps.

1. Use a bacterial strain that maintains ITR integrity

Recombination-deficient strains (e.g. JC8111, SURE2, Stabl3, XL10-Gold) are typically used when cloning AAV constructs, as they reduce the likelihood of ITR deletions1. However, depending on the particular construct, it can be very difficult to isolate a clone with fully intact ITRs using commercial strains, even those lacking RecA. To address this shortcoming, Azenta Life Sciences developed proprietary bacterial strains specifically optimized to maintain ITR integrity during plasmid propagation. The Azenta strains outperformed three commercial strains in the testing of 8 AAV plasmids with different backbones (see figure below). This difference was more pronounced for the three most challenging plasmids, with commercial strains failing to generate a clone with fully intact ITRs for at least two of the plasmids tested. 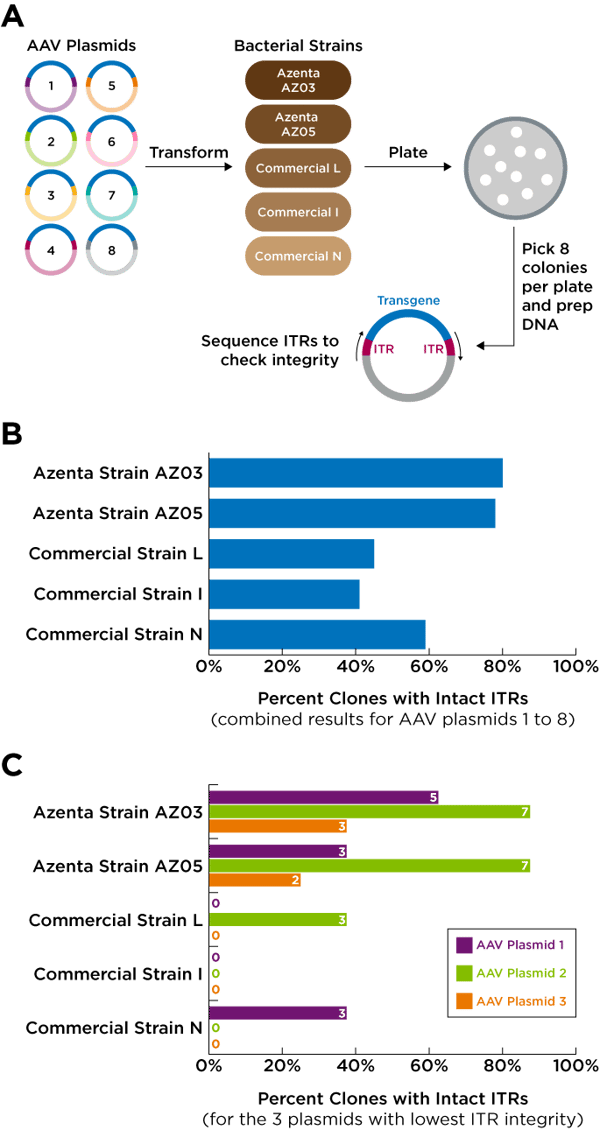 ITR integrity in bacterial strains. (A) Eight AAV plasmids with different backbones were tested in five strains. After transformation, 8 colonies per plasmid per strain were picked and screened for ITR integrity using AAV-ITR sequencing from Azenta Life Sciences (see below). (B) Combined results for all 8 AAV plasmids. (C) Results for the 3 plasmids with the lowest ITR stability. Values represent the number of successful clones out of 8 selected. Overall, the proprietary Azenta strains outperformed the commercial strains, especially in the more challenging situations.

With suboptimal bacterial strains, plasmid preparation becomes more tedious: you need to screen more colonies, assuming a correct clone can be obtained at all. Also, during scale-up, there’s a greater chance that a mutation will arise, resulting in a mixed population of plasmids that can affect downstream experiments or require reisolation of a clone.

2. Use a robust, sensitive assay to detect ITR mutations

As discussed above, standard sequencing protocols are ineffective in reading through ITRs, and restriction digestions provide limited information about ITR sequences. The lack of adequate methods to measure ITR integrity often leaves researchers uncertain about the quality of their AAV plasmid preparations. In response, Azenta Life Sciences developed a radically new Sanger sequencing protocol that can read through the challenging ITR regions, providing confirmation of ITR integrity at single-nucleotide resolution (see figure below).

Some truncated ITRs are surprisingly more challenging to sequence than intact ones, as they lead to hairpin structures with even greater stability. Alternative sequencing protocols may have some success reading through intact ITR regions but will likely fail to sequence these more difficult truncations. Consequently, the presence of such a mutation in a mixed population can escape your notice. The Azenta AAV-ITR sequencing method is sufficiently robust to read through both wild-type and mutant ITRs, enabling detection of very challenging ITR truncations in clonal and heterogeneous populations of plasmid DNA (see figure below)6. 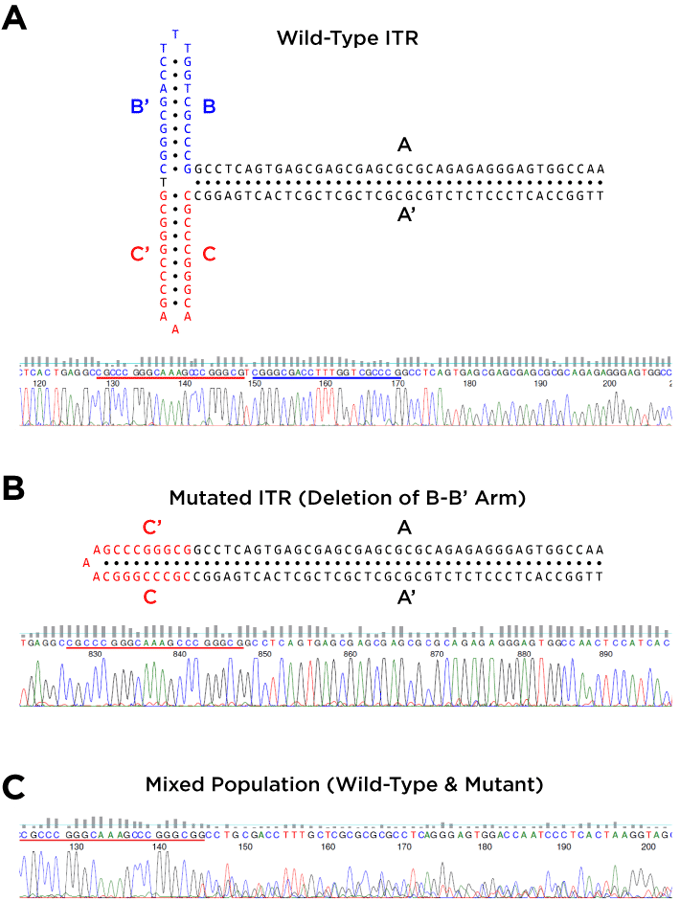 Detection of truncated ITRs using AAV-ITR sequencing from Azenta Life Sciences. (A) Diagram and chromatogram of a wild-type AAV2 ITR region. The C-C′ and B-B′ arms are underlined in red and blue, respectively. (B) Diagram and chromatogram of a mutated AAV2 ITR region containing a deletion of the B-B′ arm. (C) Chromatogram of a mixture of intact and truncated ITRs: overlapping peaks beginning at position 145 indicate a heterogenous population. The Azenta ITR sequencing method can detect both wild-type and mutant ITR sequences without significant bias.

Catching mutations early and taking immediate corrective measures can save substantial time and effort down the line and lead to more reproducible results in later experiments. A robust plasmid preparation workflow includes multiple QC checks (see figure below). Since ITR truncations can arise at any step involving amplification in bacteria, vigilance is key to ensuring ITR integrity throughout the cloning process. It's important to analyze plasmids with AAV-ITR sequencing after each DNA preparation to confirm that ITRs are intact and clonal. For preps showing a mixed population, a clone with correct ITR sequences should be reisolated, preferably in a bacterial strain that is optimized for AAV constructs (see above). 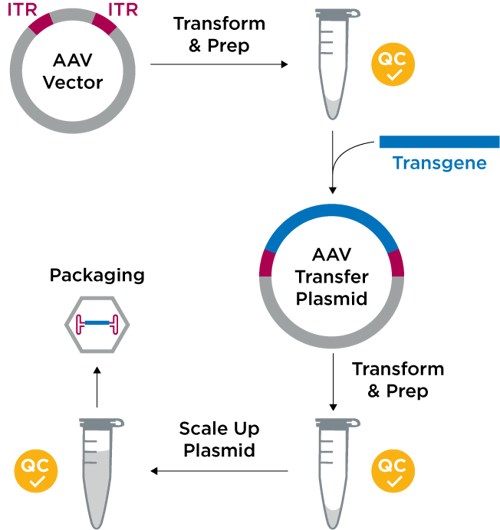 Recommended quality control (QC) checkpoints for ITR integrity. The ITR regions should be analyzed by AAV-ITR sequencing after each plasmid DNA preparation to ensure the ITRs are fully intact and clonal.

The structural features of ITR sequences pose significant quality control issues for investigators aiming to build and clone AAV constructs. However, recent technological advancements have addressed the most difficult challenges, enabling amplification and confirmation of fully intact ITR regions. Azenta's AAV plasmid preparation service exemplifies how these powerful new tools can streamline your research. Plasmids are amplified in AAV-optimized bacterial strains, analyzed by AAV-ITR sequencing before and after scale-up, and corrected if necessary. This enables you to avoid rounds of troubleshooting and gain peace of mind that your AAV constructs are 100% accurate and ready for packaging.